Join them on Friday, August 4th 12pm to 3pm for an unforgettable gathering of fans and celebrities alike as we launch our very first ‘GIS: FAMILY BRUNCH’ in the city where it all began, LAS VEGAS…

The GAAAYS IN SPAAACE: EQUALITY CELEBRATION TOUR is proud to present an event for the ENTIRE FAMILY to enjoy!!!

At the Brand New ‘HAMBURGER MARY’S’ location at 1700 East Flamingo Blvd., a mere 10 minutes from The Rio Hotel & Casino.

They will be providing party buses which will take attendees both to and from The Rio. They will share a specific schedule for pick ups and drop offs with everyone who purchases a ticket roughly a week before the event.

They are honored to be welcoming their very own ‘Freedom Fighter,’ their strongest supporter and ally since day one, the amazing NANA VISITOR (Major Kira Nerys, STAR TREK: DS9), as well as additional Celebrity Guests to be Announced Soon…

Tickets will also be available at the door for $40 on a first come, first serve basis for as long as capacity will allow.

Ticket price does not include the cost of food & drinks.

Ticket availability will be determined by the venues capacity and restrictions.

So let’s get the entire family together to celebrate the beautiful tapestry of diversity that the LGBTQ Community has finally joined on August 4th!

GENESIS of GAAAYS IN SPAAACE:

On July 22, 2016 the STAR TREK franchise took an impressive, albeit long overdue, step forward by finally featuring an openly Gay character in their latest feature film, STAR TREK: BEYOND.

Regardless of the controversy over whom they chose to “make gay,” this was still a HUGE step forward for the LGBTQ community in the history of the franchise.

After so many years of feeling marginalized and forgotten, the significance of seeing ourselves as active, equal members of the all-inclusive Utopian future that GENE RODDENBERRY created for mankind was truly overwhelming.

They felt obligated to not allow this moment in history pass without commemoration and so we created a multi-city, cross country futuristic equality celebration tour called, GAAAYS IN SPAAACE.

They hosted the first official GAAAYS IN SPAAACE celebration in Las Vegas, NV on Thursday, August 4th during Creation Entertainment’s Annual STAR TREK Convention and were blown away by the positive response we received.

NANA VISITOR (Major Kira Nerys of STAR TREK: DS9) was their very special guest and had such an amazing time that by the end of the evening she had already promised to attend the next leg of their tour in NYC on Friday, September 2nd during STAR TREK: MISSION NEW YORK.

On September 2nd GAAAYS IN SPAAACE landed in the heart of NEW YORK CITY’s theatre district and true to her word NANA was there w/them! They were also thrilled to welcome both CIRROC LOFTON (Jake Sisko of STAR TREK: DS9 ) and ROD RODDENBERRY (Exec. Producer, STAR TREK: DISCOVERY) that evening as well.

Their most recent event in SAN FRANCISCO was certainly NOT going to be outdone by any of its predecessors and so they welcomed their very own guardian angel, NANA VISITOR (Major Kira Nerys – STAR TREK: DS9) as well as TERRY FARRELL (Lt. Cmdr. Jadzia Dax – STAR TREK: DS9), CHASE MASTERSON (Leeta – STAR TREK: DS9), HANA HATAE (Molly O’brien – STAR TREK: DS9) & ADAM NIMOY (Director – FOR THE LOVE OF SPOCK) for another unforgettable night!

The GAAAYS IN SPAAACE: EQUALITY CELEBRATION TOUR is Just Getting Started.

Each and every GAAAYS IN SPAAACE event is a celebration of historic importance for LGBTQ Trekkies and all of our straight allies who have forever maintained that this day would eventually arrive. 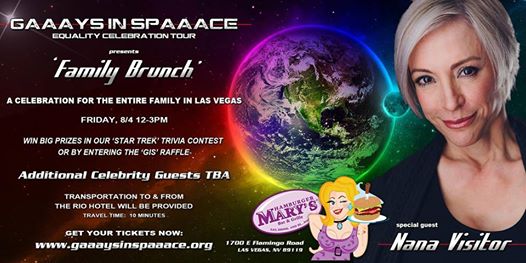